Veisto, the manufacturer of the world’s best sawing machines and sawlines, has known for ten years how it would like to monitor the movement of logs on the saw line. Five years ago they patented the solution.  A year ago, Veisto found Vire Labs and together they started to develop the solution. 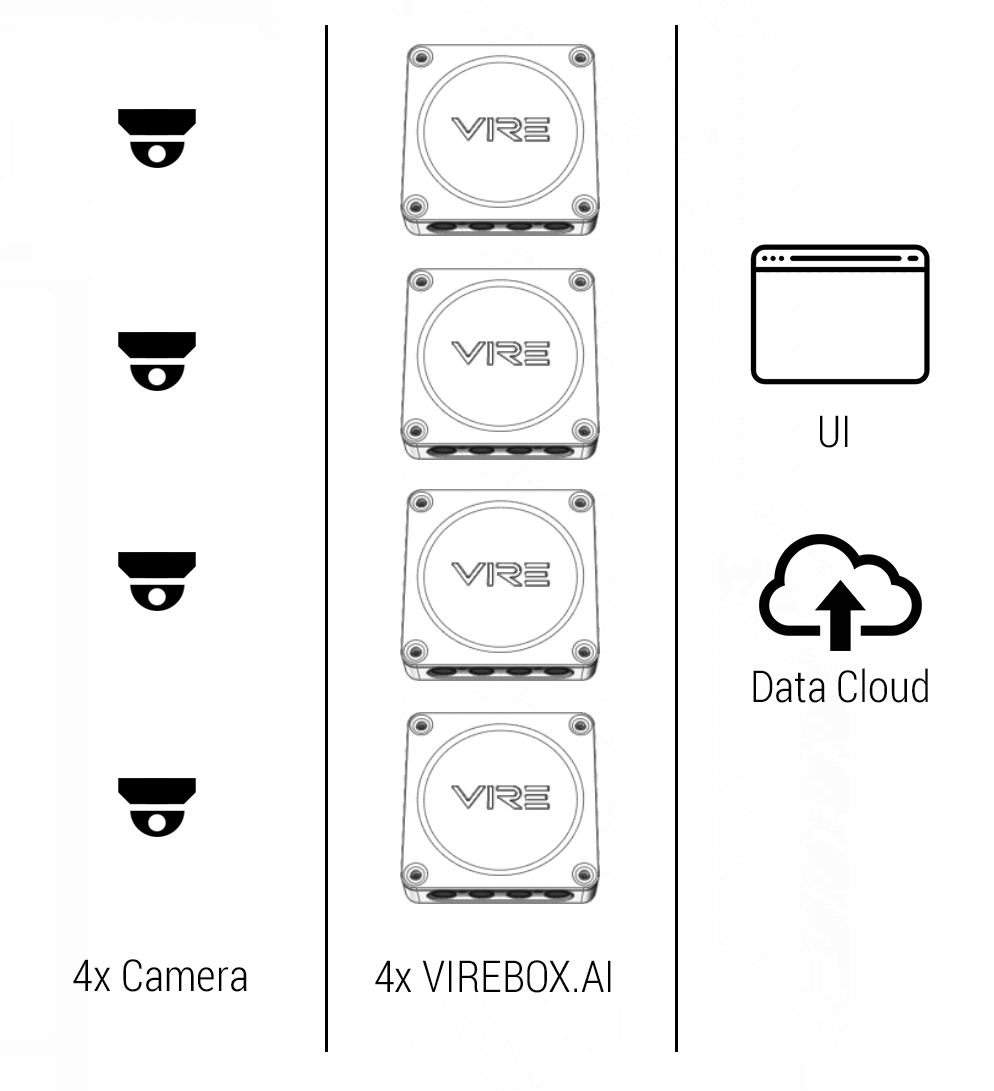 “It’s still difficult to say exactly in percentages or euros, what kind of improvements will eventually be achieved, but every cent counts. It depends on the customer’s saw line how large the benefits will be. The new solution improves the reliability and utilization of the saw line. By shortening the log interval, the number of logs per minute or during a shift is increased,” says Tuomas Halttunen, Vice President of Veisto.
With the new solution there is no need to spend time cleaning the photoelectric cells. “When this technology is in use and it makes the control of the saw line smoother, it reduces the need for manual control of the operators. It would be extremely useful If we can reduce the work needed to clear congestions. The saw lines would stop less often”, says Marko Kujala, Director of Electrical and Automation.

A robot in a cardboard box does not increase work efficiency

Technological advances in cameras and other devices needed for controlling the saw line have been rapid in recent years. This has contributed to making it possible to implement the plan at this very moment. “We are now at the level of mechanical accuracy where we can talk about centimetres rather than tens of centimetres,” Marko Kujala explains.

For Veisto, IoT means normal development of automation, which they have already been doing for a decade, and there is a lot of expertise inside the company related to this. Kujala sees that it is wise to let partners to take care of development on new areas, as it would demand a lot of studying, if everything would be done in-house. Among these tasks are machine vision, analysis of the data collected by the camera, and its interpretation using artificial intelligence.

Marko Kujala says that Veisto has tried to collaborate with various camera manufacturers over the years. In few partnerships, however, does collaboration with a device manufacturer go deep enough.

“It’s kind of like robotics. Industrial robots are made by dozens of suppliers, but a robot in a cardboard box does not yet increase the efficiency of anyone’s work. We also need to integrate operations into production and add the intelligence behind it,” Tuomas Halttunen adds.

During the last year, Veisto and Vire Labs have managed to solved big issues from the point of view of operations. In the sawmill environment, it is now possible to detect the ends of logs in a sufficiently reliable way. The basic principles concerning the cameras are becoming clear. The next step is to integrate data into the automation system, which requires work and testing to make the received signal real-time. Delays must be shortened or filtered out.

After the summer, Veisto plans to test a part of the equipment with certain functionalities. The aim is to have the pilot equipment installed by the end of the year. Only collected numerical data about the actual operation of the equipment will convince the customers. Data will allow them to calculate the benefits in euros on their own saw lines.

Veisto also sees longer-term development opportunities in the technology use in this new solution. “One benefit would be to see and identify clear system failures, such as a rupture of the track. We could also add safety circuits to the system, so that there would be a warning if a person is suddenly in the wrong place,” Halttunen mentions.

Veisto saves working time and euros, as Vire Labs, the AI equipment manufacturer also takes care of all the development work needed for integration. “It has been really nice to work with Vire Labs. There has been very little that we have had to solve by ourselves. Vire Labs has developed a wide range of solutions on their own without us having to answer a lot of questions,” Halttunen says.

Sometimes projects with new partners can cause a lot of problems for both sides, but Marko Kujala confirms that this project has not caused him to getting grey hair from. “Positive and exciting things are happening. Things look promising, there is potential, and the more we get the more we want,” he concludes.

How can we help you?

CONTACT US
We use cookies on our website to give you the most relevant experience by remembering your preferences and repeat visits. By clicking “Accept / Hyväksy”, you consent to the use of cookies. However, you can also refuse by clicking Reject / Hylkää button.
Reject / HylkääAccept / Hyväksy
Manage consent

This website uses cookies to improve your experience while you navigate through the website. Out of these, the cookies that are categorized as necessary are stored on your browser as they are essential for the working of basic functionalities of the website. We also use third-party cookies that help us analyze and understand how you use this website. These cookies will be stored in your browser only with your consent. You also have the option to opt-out of these cookies. But opting out of some of these cookies may affect your browsing experience.
SAVE & ACCEPT
Call Us (ENG) / Soita (FIN)