In Helsinki, next-generation laser scanners are used in the maintenance of trains. Enormous volumes of data challenge product development in an unprecedented way.

The Ilmala district of Helsinki is home to the largest rail yard in Finland. Its massive maintenance halls are used to maintain a majority of Finland’s long-distance train cars, as well as the Greater Helsinki commuter train fleet.

Train maintenance consists largely of inspection – cars are thoroughly checked, but ultimately only a few parts are replaced or repaired. Indeed, VR FleetCare, the unit responsible for train maintenance, set out to automate the inspection of trains and, in cooperation with Finnish AI and IT developer Vire Labs, created a solution that combines sensors and artificial intelligence.

The Train Scanner is a 6.6-metre-long pole at the Ilmala train yard. It contains three high-speed line cameras, a SICK LMS4000 laser scanner, lights for the cameras, and Vire Labs technology.

The SICK laser scanner plays a key role in the VR FleetCare and Vire Labs solution.

Train speed is a challenge for reliable measurement

In principle, the idea is simple: The full length of a train is driven past the Train Scanner, allowing the sensors in the pole to measure its surface and contours. The measurement results are analysed to find deviations and other items of interest, which can be separately reported to the maintenance crew. Thus, the amount of time that would otherwise be spent on inspection can then be devoted to repairs. Ideally, artificial intelligence can also be used to recommend a solution suitable for the problems detected.

However, this simple idea is a challenge to realise. In order to maximise the utility of the Train Scanner, it must be possible for trains to drive past it at high speeds. Train Scanner’s high-speed cameras capture up to 27,000 frames per second of the side of a train. Trains are running at high speed, however, there is a challenge for conventional laser scanner technology:

“The measurement rate for a conventional laser scanner – approximately one hundred measurements per second – is not fast enough for the accurate measurement of a fast-moving train”, explains Saari.

A normal laser scanner emits individual laser pulses and determines the distance to a given end point by measuring the time it takes for the light to be reflected back to a sensor on the scanner. Sensors can therefore measure the distances accurately, but between the individual laser pulses a train will have travelled so far that the measurement rate will not be fast enough to obtain an accurate reading. 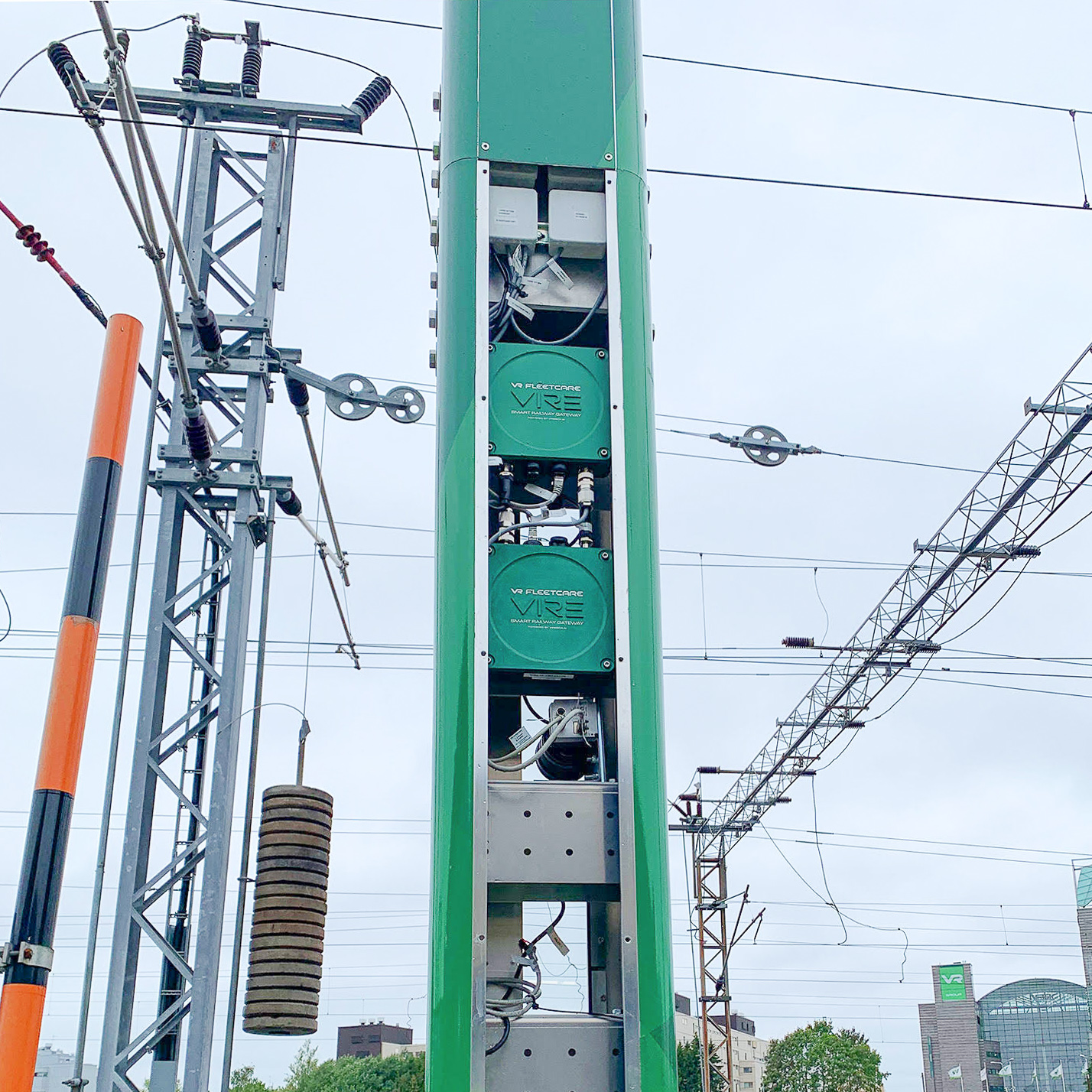 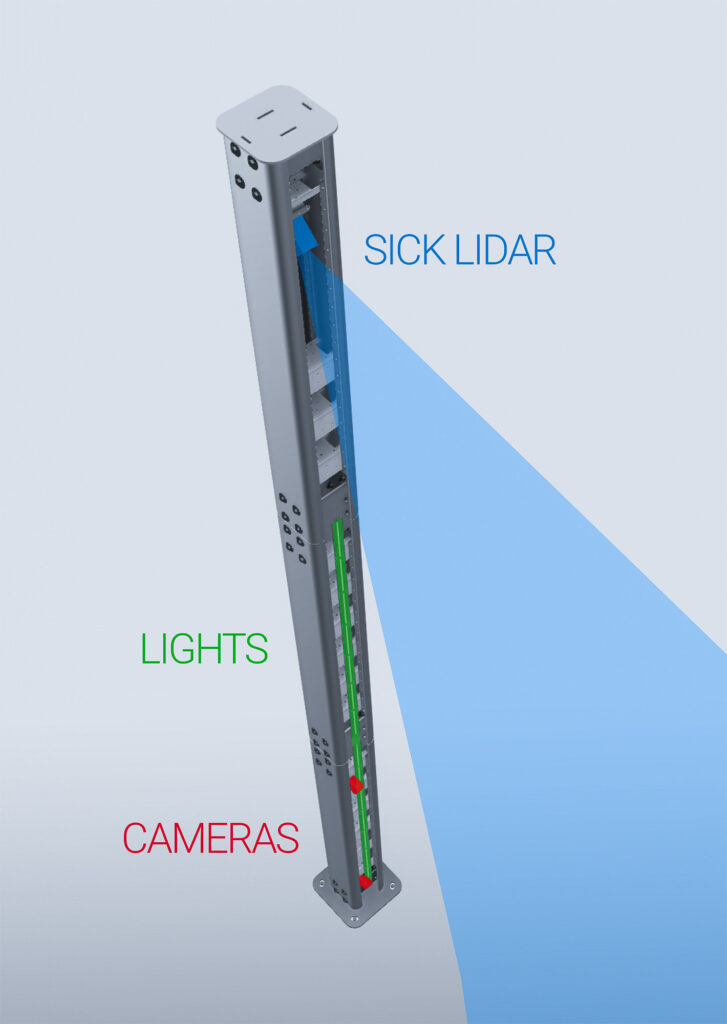 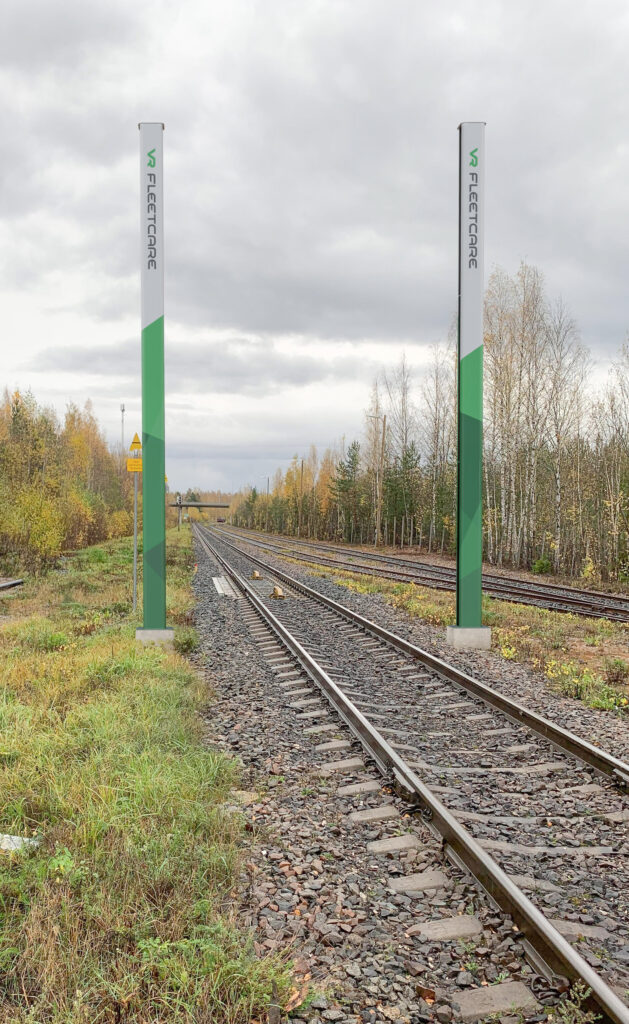 There is, however, a technology that can significantly improve the measurement rate of a laser scanner. Instead of emitting individual laser pulses, the scanner is set to emit a continuous laser beam, and the sensor measures the phase-shift caused by the object being measured at the frequency of the laser beam reflected from a given end point. The precise contours of the train are calculated from this phase-shift.

The sensor is a Phase-Shifting LiDAR, which allows for the measurement rate and precision to be increased to the level required for the analysis of a fast-moving train. This is precisely how the SICK LMS4000 laser scanner selected for use in the Train Scanner works.

It did not take long before they got their hands on an improved version of a phase-shift laser scanner, which now had a measuring distance of nearly six metres. Installed at the top of the Train Scanner pole, this type of sensor now measures both the side and roof of a train.

“This new version of the LMS4000 scanner was made available to the public in September”, explains Lehtonen.

The VR FleetCare Train Scanner combines a high measurement rate laser scanner with three line scan cameras, which capture tens of thousands of frames per second. Indeed, the next challenge for product development was processing the massive amount of data and sifting through it to find pertinent information – a veritable needle in the haystack.

The solution can be found in artificial intelligence and in neural networks. Each sensor is connected with a gigabit uplink to a Virebox computer developed by Vire Labs, which is designed precisely with an eye towards neural networks. The computers are enclosed in the same pole as the sensors.

The neural network is taught the correct shape and appearance of the train. The application compares the train passing by with this model and identifies potential deviations. The precision of the laser scanner and line scan cameras is even capable of detecting individual loose bolts on a train running by the Train Scanner at 100 km/h. Any foreign objects on the train roof can also be easily detected.

“LiDAR not only measures the contours of a surface, but also the intensity of the surface’s reflection. This allows us to distinguish between, for example, clean and dirty trains”, explains Vire Labs Business Development Director Ossi Porri.

When measurement readings are analysed locally, the Train Scanner is able to send out only meaningful findings, thus saving considerably on data transmission capacity. In other words, the Train Scanner does not use, for example, the PLC logic commonly found in industrial automation systems.
“Even though the Train Scanner application is fairly far removed from conventional industrial automation, SICK’s sensor technology is still well suited for it. We have, for example, developed our own device drivers for the sensors, and SICK has supported development from the very start”, adds Porri.

The Train Scanner is such a promising solution that VR FleetCare has begun selling it on the international rail market. Other types of customers can also benefit: The solution now used to measure commuter trains will, in the future, be able to measure, among other things, log loads on trucks. There are endless applications for smart sensors and advanced software!

What can we do to help you and your business?

PLEASE CONTACT US
We use cookies on our website to give you the most relevant experience by remembering your preferences and repeat visits. By clicking “Accept / Hyväksy”, you consent to the use of cookies. However, you can also refuse by clicking Reject / Hylkää button.
Reject / HylkääAccept / Hyväksy
Manage consent

This website uses cookies to improve your experience while you navigate through the website. Out of these, the cookies that are categorized as necessary are stored on your browser as they are essential for the working of basic functionalities of the website. We also use third-party cookies that help us analyze and understand how you use this website. These cookies will be stored in your browser only with your consent. You also have the option to opt-out of these cookies. But opting out of some of these cookies may affect your browsing experience.
SAVE & ACCEPT
Call Us (ENG) / Soita (FIN)